At Work In Whiteriver

Whiteriver (yeah, one word) was the largest community — perhaps three or four thousand people — on the White Mountain Apache Reservation and was its seat of government.  There the Tribal Council gave my crew use of a vacant house for our base of operations.  Here are some pictures taken early on before we were fully staffed.  Depicted are Tom and Dave, two memorable characters indeed*; three or four other staff members would have been out visiting other sites and interviewing officials. 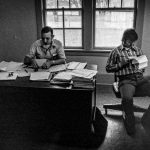 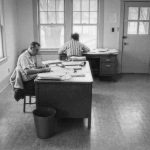 … As Seen From My Office 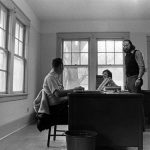 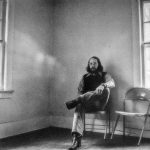 *Tom was probably the most meticulous, detail-aware person I met in my Gov’t career.  His aspiration was to be the Los Angeles office’s head of administrative services and reign over the office’s pool of female clerical support workers.  He was also a semi-professional classical pianist and played a reinforcing role in my acquisition of a piano (initiated by Lynne of the Tucson Troubadours).  When Washington visitors came out to the Rez later on for a few days, Tom used my piano to treat them to a live concert, much to their astonishment.

Dave was an engineer who brought his wife and baby to live in a cabin in the woods for several months, and was an avid skiier and outdoorsman.  He could always be relied upon to provide an utterly quaint, unique perspective to any issue with which we needed to grapple.  And he would douse his snow-and-ice-covered windshield with hot water every winter morning to clear it instantly before driving to Whiteriver.

Not shown in these pics (but I am bound to find some sooner or later) would be other staffers such as my Chinese-American mathematician who was a fanatical CSNY fan; the guitar-playing accountant from the University of Oregon; the doomsayer auditor who was buying gold as quickly as he could and watched the Watergate hearings with me; the Washington, D.C. psychologist whose hobby was sitting in on court proceedings; the ex-Special Forces guy who had had a mission in Cambodia that he couldn’t talk about but was also a pool shark; and some others.   A great, diverse and valuable team (although the LA office declined to send any female personnel).