About six or eight weeks ago, I began unearthing negatives from my stint with the White Mountain Apaches (see the Introduction here).  This weekend I came upon a few more images of Reservation scenes.  These include photos of housing, ranging from the traditional wickiup (“wigwam” in white-speak — note that the example here has been fitted with a modern door) to government housing tracts (ranging from mid-20th-century to then-recent developments) to scattered houses and cabins and shelters of all sorts.  Some dwellings from the 19th century, and perhaps older, were constructed with short rock walls extending down into the earth to create a semi-underground shelter with a roof of whatever material was at hand; I should be able to eventually find some photos of these ( I even met and visited a tribal member who returned to the reservation after gaining a law degree and refurbished one such shelter for his own private home) .  Also, we can see evidence of AIM (American Indian Movement; remember Dennis Banks and Russell Means?) activism.  The graffiti lettering “CBQ” refers to the poverty-stricken reservation community of Cibecue, incidentally. 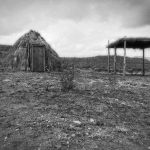 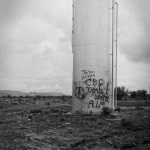 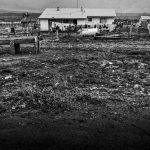 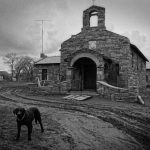 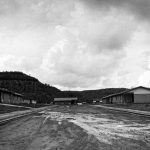 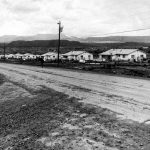 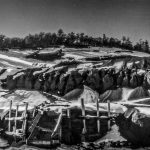